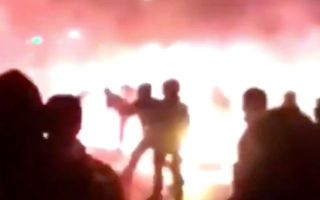 Ajax face AEK Athens in the Champions League on Tuesday evening, but the game has been overshadowed by the clashes between fans on Monday night.

As seen in the videos below, there were violent clashes between the two sets of supporters and police, while reports have suggested that hooligans from AEK’s rivals, Panathinaikos, were also involved along with ‘fans’ from Cracovia Warsaw, as noted by Sputnik News.

The clubs in question and UEFA will certainly hope that the police have things in order before, during and after the game on Tuesday, as a repeat of these scenes inside the stadium would certainly be disastrous for all concerned.

However, unfortunately it appears as though there are a minority of ‘fans’ who are intent on causing trouble with each other, and so it remains to be seen if tensions boil over again prior to the game outside the stadium.

For now though, the scenes seen below are not want they want ahead of such a key game…

? — A group of 200 Ajax ‘fans’ has reportedly attacked a AEK clubhouse in Athens. An absolute disgrace, if true.#AEKAJApic.twitter.com/1jw37yBcge