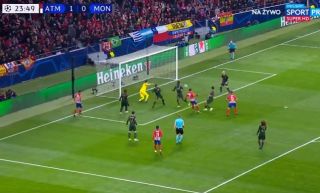 Antoine Griezmann’s goal has given Atletico Madrid an early 2-0 lead after an own goal from Monaco in the opening stages of tonight’s Champions League game.

It looks like being a long night for Thierry Henry’s side, with the Arsenal legend’s struggles since taking over from Leonardo Jardim continuing this evening.

MORE: Atletico Madrid star Griezmann reveals who he wants to win the Ballon d’Or this year – and it’s not Ronaldo or Messi

Watch the Griezmann goal video below as the France international scores a delightfully cheeky effort with the outside of his boot after finding space in the box.

It’s quality like this that makes the Atletico front-man one of the best in the world, and a valuable asset to Diego Simeone as he bids to reach a third Champions League final after twice losing against Real Madrid in the competition.