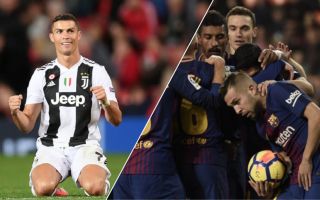 Juventus are said to be eyeing up a move for Barcelona and Spain defender Jordi Alba following a request from Cristiano Ronaldo.

With the Old Lady already having Alex Sandro at the club, one would wonder why the Italian giants would want to sign Alba, however that doesn’t seem to be the thought process for their star man Ronaldo.

According to Don Balon, the Spaniard is reportedly ‘determined’ to leave the Nou Camp, news that’ll be music to Ronaldo’s ears, and that Ronaldo has asked Juve to sign the player should they miss out on Real Madrid’s Marcelo.

The report also states that Juve want to take advantage of Alba’s contract situation with the Blaugrana, and that they are willing to offer no more than €40M for the Spanish international’s signature.

It’s been obvious for a while now that Ronaldo is one of the best players on the planet, and his presence in Turin may very well turn out to be the difference for Juventus in their pursuit of the Champions League this season.

Because of this, it’s probably a good idea for the Italian giants to keep Ronaldo happy, thus making a move for Alba, should they failed to land Marcelo, would be a wise move to go through with.

Alba is one of the best left backs on the planet, and his arrival in Turin would give Juve two top class left backs in their squad to choose from.

Now it just remains to be seen whether Alba does in fact end up leaving the Blaugrana, and whether Juventus will be successful in their pursuit of the former Valencia man, something that we’re sure Ronaldo would love to see happen.