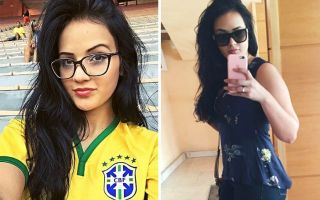 Liverpool star Fabinho’s wife Rebeca Tavares has appeared to shut down any talk of her husband potentially making a transfer to Paris Saint-Germain.

The Brazilian midfielder hasn’t got off the most convincing start at Anfield since his summer switch from Monaco and there’s been some talk of a possible move back to Ligue 1 as early as this January.

L’Equipe recently stated PSG were interested in Fabinho, claiming there could even be talks held between the two clubs when they meet in the Champions League this evening.

The Reds travel to the Parc des Princes for their big game tonight, and that could be an opportunity for talks if the player himself is indeed keen, or if the club feel they may be regretting signing him.

However, Fabinho’s missus seems to be having none of it, taking to Twitter to slam all the ‘fake news’ she’s seeing on her timeline.

When I read some fake news in twitter ……… pic.twitter.com/OCFftntYAr

Of course, she might be talking about something else, but the timing of this tweet and the way Tavares seems to have really relished the move to Liverpool since they moved in the summer suggests it’s a hit back at the transfer gossip.