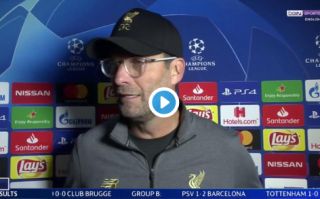 The Reds now face a crucial final game against Napoli in their final group match as they’re no longer assured of qualification to the last 16.

Klopp was not at all happy after the defeat to PSG, slamming Neymar’s play-acting throughout the game.

When asked to elaborate, the German tactician declined further questions and made an abrupt exit.

An angry Klopp accuses Neymar of playacting then storms out of the interview!#beINUCL #PSGLIV pic.twitter.com/Hdi4evaflB

In truth, this seems a tad desperate from Klopp, whose side were undoubtedly outplayed throughout most of the game.

Neymar, meanwhile, was a big part of that with a superb individual display and the winning goal.