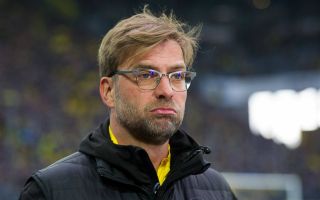 Manchester United have not had the best season, while everyone’s been raving about Liverpool for the best part of a year now.

So you can understand Red Devils supporters are now keen to enjoy this moment as their team secured qualification for the Champions League last 16 yesterday with their win over Young Boys.

Liverpool, meanwhile, have it all to do in their final group game against Napoli at Anfield, having been beaten 2-1 by Paris Saint-Germain tonight.

Despite reaching the final of the Champions League last season, the Reds now face the very serious threat of early elimination from this season’s edition of the competition.

Many United fans feel Jurgen Klopp gets an easy time from the media considering he’s yet to win anything with Liverpool, while Jose Mourinho is often widely criticised despite picking up three trophies in his time at Old Trafford and finishing above Liverpool in the Premier League last season.

Jose Mourinho has won 100% of his away matches in the UCL this season.

Klopp has lost 100% of his away matches in the UCL this season.

Klopp’s such a fraud man, guy’s won nowt at Liverpool

Liverpool has lost all of their 3 away matches in the group stage . Klopp the fraud

Scenes when Klopp is knocked out of Champions League before Mourinho.

Yesterday they said that Mourinho’s reaction carried the ring of desperation. He’s now in the round of the last 16 and Jurgen Klopp’s team needs to win their last match to go through. Desperation.

Imagine Mourinho starting a game this slow media would have killed him but Klopp is genius and wont bat an eyelid FFS……. #LFC #UCL #PSGLIV #

Not sure if i just watched liverpool or united there. 11 behind the ball, long ball for most of game haha. Klopp is a fraud