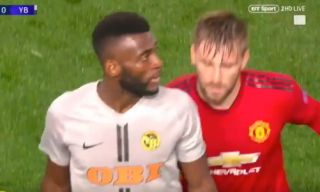 With the score at 0-0, the visitors seemed keen to run down the clock and hold on to what would have been a well-earned point.

MORE: Manchester United star speaks out after falling out of favour with Jose Mourinho

Nsame tried to run down an extra few seconds before getting into something of a tussle with Shaw as he pushed him towards the touchline to speed him up.

The England international then tweeted about the incident with the teasing caption: ‘Just look at it as a last dance mate’.

Just look at it as a last dance mate pic.twitter.com/GzfTovD7Yu

Marouane Fellaini later scored United’s late winner to secure a 1-0 win, ensuring the home team had the last laugh in the end.