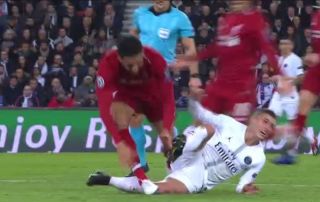 The two teams are contesting tonight’s Champions League clash and it’s been a fast-paced start, with PSG the better team so far and 1-0 to the good thanks to an early Juan Bernat goal.

Still, they could easily have gone down to ten men after this nasty tackle from Verratti, who only got a yellow card.

BT Sport have pictures of the challenge and it gets worse with every look – with a number of fans clearly not happy!

Marco Verratti gets booked for a late challenge on Joe Gomez…

Should it have been red?! pic.twitter.com/XamnwetWhr

Verratti should be off. #PSGLFC

#PSGLIV HOW THE FUCK WAS THAT NOT A RED FOR VERRATTI

HOW was that not a red card for Verratti. Disgraceful.