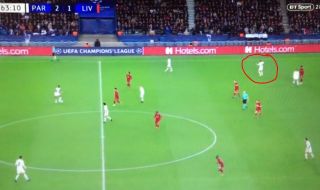 Neymar actually missed a pass tonight in the Paris Saint-Germain game against Liverpool because he was too busy waving at the crowd.

Watch this bizarre Neymar video below, as the Brazil international is looking away from play trying to raise the noise levels by gesturing at PSG’s fans at the Parc des Princes.

As a result, his team-mate passes it towards him, only for it to run out of play for a throw in to Liverpool.

It’s a nice idea, Neymar, but remember to pay attention to the actual football as well, yeah?

Neymar let’s a pass go right past him while waving at the crowd. from soccer