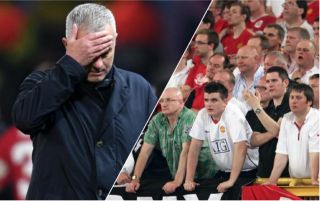 Manchester United may have secured their place in the last 16 of the Champions League with a win over Young Boys last night, but that didn’t stop fans from slating Jose Mourinho for this specific moment that occurred in the match.

The Red Devils had to rely on a 91st minute goal from midfielder Marouane Fellaini in order to overcome the Swiss side, something that now means they have progressed into the next stage of the competition.

However, the club’s result didn’t stop fans from hammering Mourinho for his reaction to Marcus Rashford’s first half miss, one that didn’t prove costly in the end after all.

The England international missed a golden chance to put his side ahead in the fifth minute of the match, something that Mourinho was visibly disappointed with.

The Portuguese coach’s reaction lead to a number of fans to take to Twitter to berate him, with one user even branding the 55-year-old’s reaction as “disgraceful”.

We can see why fans aren’t too happy with Mourinho for this, as Rashford’s miss was hardly match defining, and his side still had 85 minutes left to score the goal that ended up seeing them through to the round of 16.

Do you agree with these comments on Mourinho’s reaction? Let us know down below.

Mourinho's reaction to Rashford's miss was disgraceful. Frustrated with a miss is understandable, but folding your arms and mumbling about a young striker is terrible management. He's paid millions to motivate these boys. Not humiliate

"If I saw my manager react like that, I would be absolutely livid."@GaryLineker gives his verdict on Jose Mourinho's reaction to a Marcus Rashford miss… pic.twitter.com/AwtiIA3Krv

Mourinho reaction to an early first half Rashford miss.
Not sure how this helps Rashford’s confidence when he looks over to the touchline? pic.twitter.com/c7Nrd0MBGZ

Mourinho’s petulant reaction to that Rashford miss sums him up – he just wouldn’t have reacted like that years ago!

Mourinho’s reaction to Rashford’s miss there says it all. Man has lost the marbles.

What a disgusting reaction from Mourinho after Rashford’s miss. Are managers not meant to try get the best out of their players, not antagonise them ?

Mourinho’s reaction to Rashford’s miss says it all. He instils no confidence in his players anymore. Complete opposite of the positivity you see from Guardiola. #MUNBSCYB

Saying that, as much as Rashford should have done better, that is a DREADFUL reaction from Mourinho. Everything that's wrong about him. #MUFC