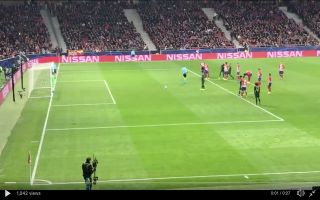 Monaco striker Radamel Falcao’s homecoming to Atletico Madrid certainly didn’t go to plan this evening with the Colombian missing a penalty in the 83rd minute of the tie.

At 2-0 down Monaco were handed a late lifeline after Atletico defender Stefan Savic was sent off for a hand-ball in the box in the 82nd minute.

Thierry Henry’s side had the chance to spark a late resurgence but Falcao failed to make the most of his opportunity and instead put his penalty wide.

Falcao’s penalty was disastrous and the Colombian will be kicking himself tonight knowing that he could have led a late comeback against his former club if he stayed focused.

Check out Falcao’s miss below:

Falcao steps up to take a Pen against his old club and…. pic.twitter.com/GrKqBQyDVB

Here is another angle of Falcao’s shocking miss:

times like this i feel sorry for thierry henry. when ur players play like monaco are rn and take penalties like falcao what can u do as a manager ?? #ATMASM #UCL pic.twitter.com/zLJIORV0Il

Falcao certainly won’t want to be reminded of his dismal penalty record in the Champions League:

Radamel Falcao has missed all three penalties has has taken in the Champions League:

Putting it wide against his former club. ? pic.twitter.com/hG5F4hV8W2