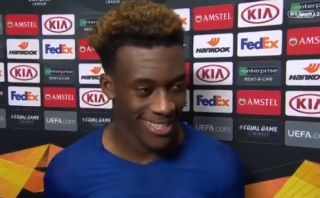 Chelsea wonderkid Callum Hudson-Odoi admitted his first thought after scoring his first goal for the Blues was that it might all be a dream.

The 18-year-old has revealed he was almost in disbelief as his effort found the back of the net, with the teenager later going on to add an assist for Alvaro Morata for the fourth goal as well.

It was a good win for Chelsea after defeat to Tottenham at the weekend, and Hudson-Odoi seemed in dreamland in his interview after the game.

Watch the youngster speaking in the clip from BT Sport below:

"I couldn't believe it, I thought it was a dream!"

"I've just got to keep working hard in training."

Callum Hudson-Odoi bagged his first goal for Chelsea tonight, and it's clear he has a mature head on young shoulders ? pic.twitter.com/alLcR4h1CB