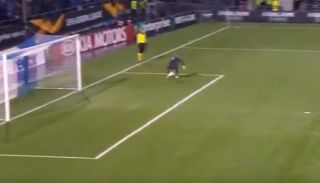 Liverpool fans will still be reeling from their defeat to Paris Saint-Germain last night, but things could be worse – Loris Karius could still be your goalkeeper.

The German notably messed up on the big stage last season with two huge gaffes in the Champions League final defeat to Real Madrid.

Unsurprisingly, Karius was then farmed out on loan to Besiktas for this season, and he’s continuing to look a total liability between the sticks.

This is basic stuff and Karius just looks a nervous wreck on the pitch right now.

Good luck to him as he looks for a club after this season, with Besiktas unlikely to want to keep him permanently, while LFC surely won’t let him near their starting XI ever again.