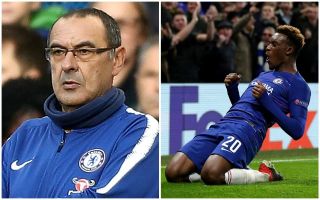 Chelsea manager Maurizio Sarri has sent a rather harsh message to his match hero on Thursday night, Callum Hudson-Odoi.

The 18-year-old enjoyed a memorable evening as he scored his first ever goal for his boyhood club Chelsea in their Europa League win over PAOK.

Hudson-Odoi also showed his class with a neat assist for Alvaro Morata late on as he played the 90 minutes and really impressed in a 4-0 victory.

Still, it seems Sarri was rather less excited about the impact Hudson-Odoi made, stressing afterwards that he did not believe the teenage attacker was ready to play for such a big club in the Premier League.

On top of that, the Italian played down the achievement of the England youth international for managing to shine in a game like this, reminding everyone that PAOK were down to ten men and that he’d like to see how he plays in a more challenging game.

This doesn’t seem the best way to get a young player’s confidence up after such a big night in his career, and fans will hope Hudson-Odoi does get the chances soon to show just how much of an impact he can make on a regular basis in the first-team.

Sarri on Hudson-Odoi: "I think that he played very well but the type of match was for his characteristics. They had ten men after seven minutes, he is able to play in this and I want to see him when we have to play more in the defensive phase." pic.twitter.com/d6DiHal65e

Sarri: "I don’t know if Hudson-Odoi is able for the Premier League at 18, especially in a big team." #cfc