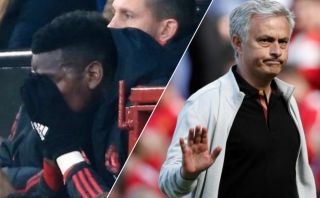 The real reason that Manchester United manager Jose Mourinho axed Paul Pogba from the starting lineup for United’s clash against Young Boys has been revealed.

According to a report from the MailOnline, Jose Mourinho cut Pogba from the Red Devils starting lineup as he believes the Frenchman displayed a lack of heart and poor commitment in United’s draw against Crystal Palace.

It’s understood that Mourinho and United’s coaching staff were deeply disappointed with Pogba’s showing on the weekend.

Mourinho went on a sensational tirade against his players following the goalless draw and claimed the players didn’t show enough heart:

"It was not enough from the heart, You must play with brain and also with heart and I think not enough heart,”

Pogba was brought on as a 64th minute substitute for United on Tuesday night, straight after being brought on the midfielder caused controversy with his actions.

How did the fourth official overlook Pogba and allowed him unto the pitch with a necklace. MU vs YB.@ChampionsLeague 2018/2019

The Mail including in their report that Pogba forgetting to take his necklace off is a perfect example of just how unfocused the Frenchman is at Old Trafford.

According to the report it is unknown as of yet whether or not the 25-year-old will return to the starting lineup for United’s Premier League clash against Southampton coming up on Saturday.