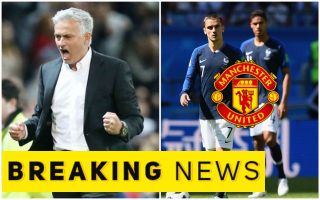 Speculation seems to be growing that the France international could be on his way to United soon, with Don Balon also linking the player with a move to Jose Mourinho’s side earlier today.

And now another Spanish source, Diario Gol, claims Varane has agreed on a proposed move to United after becoming unsettled at Real, with the Red Devils now lining up a bid of around £89million to persuade his club into selling.

If that were enough to persuade Madrid to let Varane go, the 25-year-old would become United’s joint-club-record purchase, with Paul Pogba joining from Juventus for the same price back in 2016, as per BBC Sport‘s report at the time.

There’s no doubt Mourinho could do with more options in defence at the moment after poor seasons from the likes of Chris Smalling, Eric Bailly and Phil Jones, while Marcos Rojo has had his injury problems.

Raphael Varane looks set for a transfer to Manchester United

Varane is the real deal after impressing in his time at the Bernabeu and with the French national team, playing a key role in them winning the World Cup in the summer.

MUFC fans would surely be thrilled if their club could pull this major deal off, whatever the price.