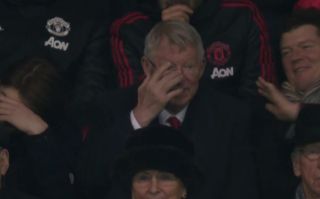 Although United ended up going into half time level with the Saints at 2-2, they were 2-0 down in the match thanks to goals from Nathan Redmond and Cedric Soares.

Following Cedric’s superb free-kick, United hero Ferguson was caught laughing by cameras, something that may not please many Red Devils supporters.

Given how bad United were playing at the time, we don’t blame Fergie for laughing, as his old side’s defending was near comical at times!

The pictures of Ferguson laughing can be seen below. You know the saying ‘if I didn’t laugh I’d cry’?, we think that applies well on this occasion!

Even Sir Alex is laughing.
What else can we do at this point ????? pic.twitter.com/vojQVQ1MjO