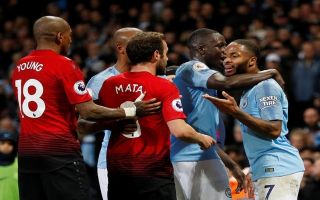 In an interview published by The Times which was later reported by Mirror Football, Sterling revealed that United star Juan Mata told him to “show some respect” during the final moments of City’s demolition of United in the derby earlier this month.

Sterling as well as teammates Phil Foden and Leroy Sane began to taunt and toy with the Red Devils in the final minutes of the match, something that clearly didn’t sit well with Mata.

Take a look at the City trio taunting United to their fans excitement below:

Foden, Sane and Sterling doing Man United dirty by having a rondo drill during the game ? pic.twitter.com/HtuLaWZuvq

Sterling told the times that he believed he wasn’t acting disrespectfully with his actions:

“I was keeping the ball in the corner. I can understand if we had lost the ball, and they’d gone down the other end, but I am trying to waste time, attract a foul.

“I wasn’t trying to disrespect them. I wouldn’t. I was just trying to keep the ball in the corner and entertain the fans at the same time.

Sterling was on the receiving end of some criticism from his manager, Pep Guardiola at the full-time whistle, Guardiola clearly wasn’t happy with Sterling’s showboating at the end of the game.

This is why Pep Guardiola is the best coach in the world because even after a great win he still has that desire to tell Sterling what he could do better pic.twitter.com/3rfFreAAZ5

Guardiola had this to say on Sterling’s late game antics:

“He made some movements with his legs that we could avoid. He’s young and will learn.”

Sterling is in fantastic form for City this season and the England international also managed to overcome his woes for the national team last month, by scoring a brace against Spain in the Nations League.