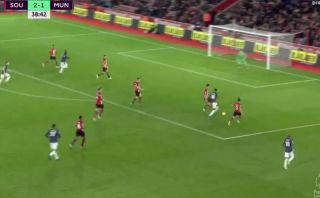 Ander Herrera scored a stunning back-flick goal to draw Man United level in their clash against Southampton at St Mary’s stadium this evening.

Having just got one back minutes earlier through Romelu Lukaku, it was Herrera’s turn to find the net for United next, as a cross from Marcus Rashford was flicked home by the Spaniard to draw Jose Mourinho’s side level.

Following this goal, United will be hoping they can push on the second half and score the goals that’ll see them take home all three points this evening.

Here’s a clip of Herrera’s goal. The audacity!