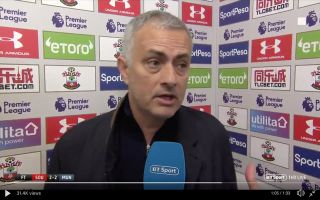 Jose Mourinho has once again questioned the passion and desire of the Manchester United players following the side’s 2-2 draw against Southampton this evening.

The Red Devils looked very lethargic tonight against a Southampton side who are being tipped for relegation. This certainly isn’t the level of performance United should be turning in if they are serious about returning to their former glory.

Mourinho made the claim that his side lacked ‘mad dogs’ – it seems that Mourinho would like his players to press and push the pace more.

Check out a video of Mourinho’s post-match comments below:

Mourinho was heralded as one of the greatest defensive coaches of all time – the Portuguese’s reputation has certainly plummeted during his time at Old Trafford.

United have had a disastrous start to the season and there hopes of challenging Manchester City and Liverpool for the Premier League title were quickly thrown out the window after their poor performances.

Mourinho may not be getting the best out of these players but the players can’t shirk any responsibility – they are definitely underperforming.