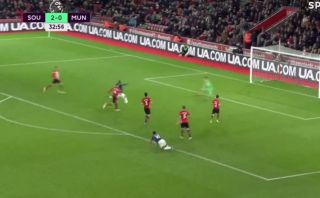 Romelu Lukaku bagged a fine finish for Man United tonight as he halved the Red Devils’ deficit in their match against Southamton at St Mary’s.

With United 2-0 down, Marcus Rashford put through Lukaku in the 33rd minute, as the Belgian international powered home a fine finish with his left to half the deficit and hand his side a way back into the match.

United definitely needed that goal to perk them up, and some fans will be hoping this strike from Lukaku is enough to see their side complete a remarkable comeback against the Saints.

Here’s a clip of Lukaku’s goal. Great hold-up play from Rashford there.