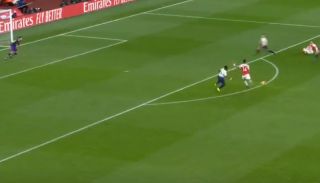 Arsenal have levelled it up in the North London Derby with a Pierre-Emerick Aubameyang wonder-goal from just outside the box.

Watch the Aubameyang goal video below as the Gabonese forward absolutely lashes home an unstoppable curling effort first-time after pouncing on a loose ball.

MORE: Video: Aubameyang slots away penalty vs Tottenham and becomes instant Arsenal legend with his celebration

The former Borussia Dortmund man is having a fine game today, despite some fans being hugely critical of him for an unconvincing first half display in which he scored a penalty but missed some other big chances.

He’s shown them his quality now with this equaliser in a thrilling derby at the Emirates Stadium.