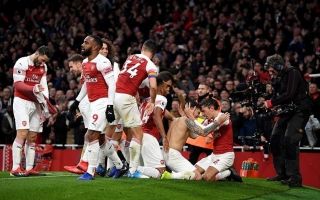 Some Arsenal fans have sent the club a clear message after the Gunners demolished Tottenham 4-2, in the North London derby earlier today.

Gooners were extremely impressed with the performances from Man of the Match Lucas Torreira and misfit Aaron Ramsey.

The midfield pair were instrumental in Arsenal’s victory, Ramsey was only brought on at halftime and the Welshman had an game-changing impact, Ramsey provided two assists in his 45 minutes on the pitch.

Torreira continued his wonderful form this season with a combative display in the middle of the park, the 22-year-old is quickly turning into the Premier League’s signing of the season.

Torreira capped off his impressive display by scoring his first goal for the club in the 77th minute – to seal a victory for Unai Emery’s side.

This fan called for the mighty Uruguayan to be given the same wages as superstar Mesut Ozil:

Give him Ozil’s wages.

Ramsey also won himself plaudits for his time on and off the pitch. The Welshman was involved in a first-half melee with Spurs stars Dele Alli and Eric Dier after Dier’s goal half an hour into the tie.

Ramsey didn’t appreciate Dier’s ‘shush’ celebration to the Arsenal fans and the midfielder sprinted from the Gunners bench to defend his side’s honour. Ramsey clashed with Alli and the pair had to be separated before they came to the blows.

Dier was then seen mouthing “go back to the bench” to Ramsey. Oh did Ramsey make the England international eat his words.

Ramsey provided 2 assists off the bench to spur the Gunners to victory, Unai Emery’s men wouldn’t have come away with the bragging rights if it wasn’t for Ramsey.

Check out Ramsey’s clash with Alli and Dier below:

Ramsey’s contract at Arsenal expires in the summer and fans have questioned the club’s decision not to offer him a new deal after his display earlier:

How has Ramsey put in a performance like this with no contract on the table for him. Respect man.

??Been screwed by the club
??Gets into a fight on the sidelines
??Comes on at halftime and changes the game

Utmost respect. What a day for him

Aaron Ramsey has 6 assists in the league this season which is the highest and he's been 'shit' and 'finished' according to some. I will back Aaron Ramsey till his last day at this club. What a player.

Give Aaron Ramsey a new contract.

Chat to me about Aaron Ramsey haters. What an impact he has had. Despite the club dealing with his contract horribly, 100% professionalism. 2 assists and unbelievable running. One of the best midfielders around, blessed to have him.

Why on earth are Arsenal allowing Aaron Ramsey to leave? He's surely worth a new contract. His passion, passing and work-rate so important to Arsenal's comeback against Spurs. Delivered an immense 45 minutes. His quality and character will be expensive to replace. #afc #ARSTOT

One of the first players in the first half scuffle. Came on at half-time and changed the game. 2 assists. Endless running. They say negotiations are dead but looks like Ramsey is fighting for a contract offer and if he keeps delivering performances like that, he deserves one. pic.twitter.com/ntWHKdY8F8

Give Ramsey the new contract!

Aaron ramsey changed the game…cant believe we will let him go! ?

Aaron Ramsey came on and bossed Dele Alli YET AGAIN, I dont wanna hear it no more

Remember when Dier told Ramsey to ‘go and sit down’ after he scored? He’ll be dreaming about that for weeks after Rambo came on and showed him what being a midfielder is all about.

It seems like Ramsey’s performance today has warranted him a new contract. Today’s win could be crucial for Arsenal, they are now sitting in 4th place – ahead of their rivals Tottenham on goal difference.

This win could be the catalyst to Arsenal getting themselves back into the Champions League.