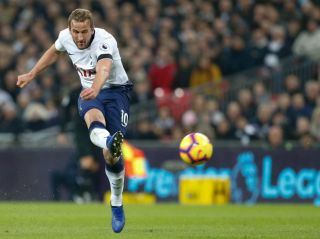 Tottenham striker Harry Kane buried a penalty against Arsenal at the Emirates to become the joint highest scorer in north London derby history.

The Gunners are 2-1 down at half-time at the Emirates after a pulsating first 45 minutes, with plenty of action at both ends of the pitch.

The home side took the lead via a Pierre-Emerick Aubameyang penalty but were pegged back on the half-hour mark as Eric Dier headed home a Christian Eriksen free-kick.

Things got worse for Arsenal just four minutes later, after Spurs were awarded a spot-kick of their own. Rob Holding was adjudged to have fouled Son Heung-Min in the box which gave Kane the chance to score from 12 yards and he duly obliged.

That goal marked the English forward’s eighth in a north London derby, which equals the all-time Premier League record set by Emmanuel Adebayor – who had spells at both Arsenal and Tottenham.

Kane now has eight goals in 14 league games this term and his latest strike has put the visitors in pole position to close the gap on Liverpool and Manchester City above them in the table.

Spurs are seeking a seventh straight win in all competitions while the Gunners are looking to maintain an 18-match unbeaten run, which has seen them emerge as real contenders for a top-four league finish.

Kane will surely now be hoping to secure his place in history outright with a second goal, while Emery will have work to do in order to galvanise his team at the break, ahead of a crucial second period which could have huge ramifications on their season.