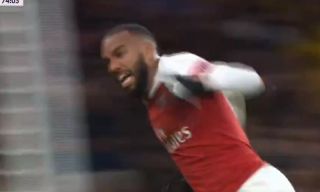 Alexandre Lacazette scored a fine goal from outside the box to make it 3-2 to Arsenal against rivals Tottenham in today’s North London Derby.

Spurs youngster Juan Foyth made a mess of things as Aaron Ramsey robbed the ball off him in his own half before playing in Lacazette.

From there, the Frenchman showed great composure and pin-point accuracy to take a touch before rifling home with his left foot.

The Emirates Stadium was absolutely rocking at that goal as the Gunners came from behind to lead again against Spurs in this thriller this afternoon.