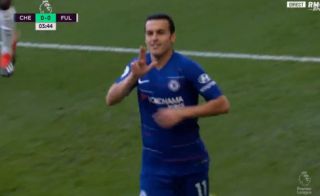 Watch the Pedro goal video below as Chelsea took an early lead against London rivals Fulham in their Premier League match today.

The Spanish winger finished superbly after cutting in onto his left foot from the right hand side of the penalty area.

However, the real hero of the move was N’Golo Kante, who showed manager Maurizio Sarri just how effective he can be in his new attacking role this season.

The France international used his defensive qualities to close down the Fulham player in possession before breaking forward to supply Pedro with the killer pass for the goal.

This superb burst from Kante shows what he’s all about and how he can use his defensive qualities like his tremendous work rate to good effect going forward as well, rather than just being a shield in front of the defence as he’s usually played in the past.