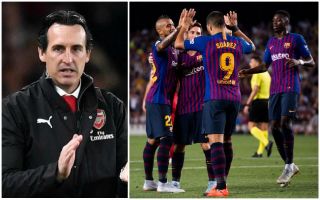 Arsenal and Liverpool may want to take note as Barcelona look ready to try and seal the transfer of Borussia Dortmund winger Jadon Sancho to replace Ousmane Dembele.

The young Frenchman has had a tough time since moving to the Nou Camp, failing to reach his best form and having his behaviour and professionalism regularly questioned.

The latest from Don Balon is that there is no way back for Dembele at Barcelona, and they’re looking at highly-rated Dortmund attacker Sancho as his successor.

The talented Englishman could be a fine signing for the Catalan giants, but if Dembele is available then one imagines there is bound to be strong interest from the Premier League.

The 21-year-old remains a big talent despite his Barca struggles, and that is reflected in the fact that a recent Don Balon report claimed the club wanted around €100million for him.

That piece also linked Arsenal and Liverpool as being among the former Dortmund man’s admirers, with both teams likely to benefit from some improvements up front.

The likes of Mohamed Salah and Roberto Firmino have not shone as brightly as last season, with Dembele an ideal replacement to add more pace and flair to the Reds’ front three.