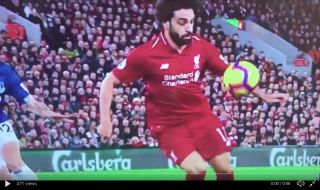 Liverpool superstar Mohamed Salah had a moment to forget during the Merseyside derby this weekend, the Egyptian looked a little out of his depth today.

During the derby the ball dropped to Salah and fans thought the Egyptian would punish the Toffees with his clinical finishing but instead Salah managed to completely miss the ball.

Instead of lashing a devastating shot towards goal Liverpool’s main man managed to connect with thin air.

Check out the video of Salah’s miskick below:

Mo Salah doing a ‘Pogba’. Is this the new trend? ? pic.twitter.com/rydixi8HND

Check out some reaction to Salah’s moment to forget:

Salah will need to improve his form very soon if Liverpool have any hope of keeping the pressure on Manchester City. The Reds are the only team in the league that can prevent Pep Guardiola’s men from running away with the league again.