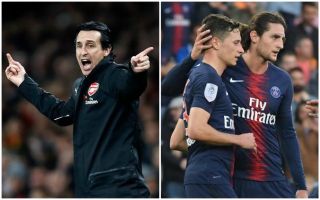 Paris Saint-Germain midfielder Adrien Rabiot reportedly missed the club’s latest training session as PSG look eager to get rid of him in the January transfer window.

This is according to Spanish outlet Don Balon, who add that the Frenchman looks most likely to make a move to Real Madrid this winter.

MORE: No Mesut Ozil, new formation: How Unai Emery must tinker his Arsenal side to end wretched 12-year run at Manchester United

However, Rabiot has long attracted rumoured interest from Premier League clubs as well as he nears the end of his contract, which understandably makes him a tempting option for most teams on a potential cut-price deal.

Don Balon state Rabiot’s asking price this January is as low as £27million, while just days ago the Sun linked Arsenal as one of his admirers.

This could be a fine swoop by Unai Emery on his old club PSG, with Arsenal in need of a top midfield signing to replace one of their own star names heading towards being out of contract.

Aaron Ramsey’s deal is due to expire at the end of the season and would be a big loss for the Gunners, though Rabiot could undoubtedly ensure his departure is not felt too strongly.

The 23-year-old has all the qualities to play for a top Premier League club, and his intelligent style of play and good work rate should make him ideal for Emery’s Arsenal.