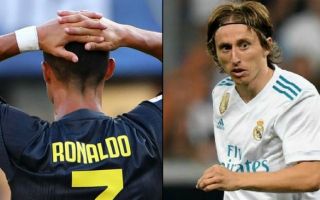 Juventus star Cristiano Ronaldo is said to have been stunned and angered by his former Real Madrid team-mate winning the 2018 Ballon d’Or award.

The Portugal international has won the prize five times in his career, a joint record with Barcelona superstar Lionel Messi, with the pair dominating the trophy for the last decade.

Modric surprisingly ended that dominance this year, however, after a superb 2018 in which he won another Champions League final with Real Madrid and also guided underdogs Croatia to their first ever World Cup final appearance.

According to Don Balon, Ronaldo was not happy to see Modric take the prize, and did not attend the ceremony last night.

This sounds fairly typical of the Juve front-man, who is known for being super competitive, which occasionally makes him come across as a bad loser.