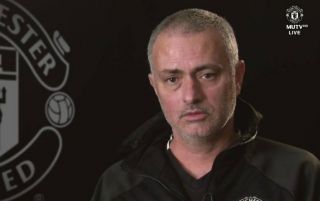 Manchester United manager Jose Mourinho has got involved in latest bizarre internal row at the club, having snapped at an MUFC TV reporter and refused to provide them an injury update ahead of this week’s clash with Arsenal.

According to the Independent, United face doubts over several big names ahead of the visit of the Gunners on Wednesday night, but Mourinho remained tight-lipped about who could be available, despite being asked by his own in-house TV channel.

“I don’t want to update you, I would like Arsenal TV to make the same questions but they don’t, they hide everything from the inside, so why should I answer to you,” he said.

“We are going to be in difficulty again to build the team. We are again going to have to make adaptations and compensations to try to give some balance to the team.

“But then I believe we are again going to have the spirit to fight and to try to win the match.”

This could be some attempt at mind names as he hopes to avoid giving too much away about his team selection, keeping Arsenal on their toes as they head to Old Trafford.

However, it doesn’t come across too well from Mourinho, who seems increasingly isolated at United after a difficult season on and off the pitch.

The Portuguese tactician has been unable to coax good results or performances out of his players, while various reports throughout the campaign have pointed towards disharmony between himself and his players and club chiefs above him.

To now be picking fights with United’s media team seems another strange move from a man who really seems to be losing his magic touch at the highest level.