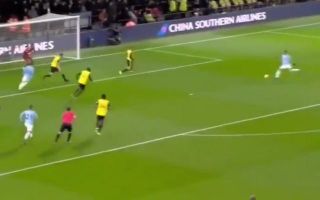 Man City doubled their lead at Watford through some wonderful build-up play before Riyad Mahrez produced a brilliant first-time finish.

The 27-year-old was crucial in finding a breakthrough in the first half, as his perfect delivery found Leroy Sane to score the opening goal of the game at Vicarage Road.

However, he went from provider to goalscorer after the break, as seen in the video below. After some intricate and patient passing which involved David Silva, Gabriel Jesus squared for his teammate who kept his composure and produced a top finish without taking a touch first.

It’s another top-class goal from the Premier League leaders, as they look to extend their lead at the top of the table to pile the pressure on Liverpool to respond when they face Burnley at Turf Moor on Wednesday night.

That’s now 45 goals and counting for Pep Guardiola’s men in just 15 Premier League games this season as they continue to dazzle in the final third with several stars stepping up to deliver.