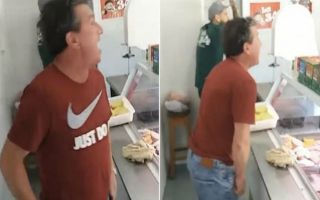 Ricardo Torreira went wild after his son Lucas scored in the north London derby on Sunday, which helped Arsenal secure a 4-2 win.

The Gunners produced a superb second-half display to down Tottenham at the Emirates, with Torreira grabbing the last goal of the game after being played into the box by Pierre-Emerick Aubameyang.

The Uruguayan steadied himself calmly before dispatching the ball past Hugo Lloris, sparking jubilant scenes in not only the home crowd but also in his father’s food store.

Ricardo couldn’t contain his joy and began pumping his fists into the air while screaming ‘Golazo, Golazo!!’ and seemed to become overwhelmed with emotion as he placed his hand across his heart.

Check out the brilliant reaction to his son’s first Arsenal goal below, via Twitter.