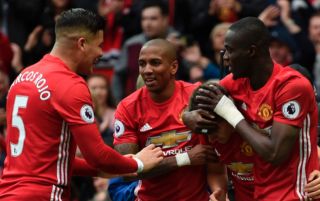 Manchester United went into half time level vs Arsenal this evening following a goal from Anthony Martial, however it wasn’t the Frenchman’s goal that seemed to catch the eye of these United fans.

The Gunners took the lead in the 26th minute after an awful howler from Red Devils shot-stopper David De Gea, however Martial then equalised five minutes later to draw the home side level.

The two sides then went into the break all square, and it seems like there’s all to play for in the second half as both teams look to come away from the affair with all three points.

Despite Martial’s goal in the first half, it wasn’t the Frenchamn grabbing the headlines amongst United fans, but defender Marcos Rojo.

Rojo, who hasn’t started for Jose Mourinho’s side in a while, returned to United’s starting XI this evening, something that looks to have paid dividends given how the Argentine played in the first 45 minutes.

The defender has been quality at the back for the home side thus far, with Unai Emery’s men seemingly struggling to break down the partnership of him, Eric Bailly and Chris Smalling.

Thus, fans have taken to Twitter to laud Rojo for his display in the first half this evening, and we’re sure they’d be hoping he can keep this level of performance up to help his side claim all three points come full time!

Rojo been great so far tonight. Just what we’ve been missing! Come on @ManUtd

Rojo been our best player so far

Rojo has been good outlet from back so far.

I have missed Rojo. Been very good so far. #mufc

Rojo class so far. He’s been on Jose’s shit list for a while, Baily too and he’s been good tonight also.

Rojo and Dalot have been superb and Bailly decent tonight. All are ballers.