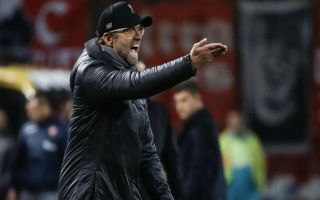 England international Joe Gomez was stretchered off the pitch after only 20 minutes of action this evening, the defender suffered an ankle injury following a slide tackle from Burnley’s Ben Mee.

Fortunately Liverpool managed to grab the three points regardless but they may never have gone 1-0 down in the first place if Gomez remained on the pitch.

Jurgen Klopp has confirmed that Joe Gomez has an ankle injury. He will have a scan tomorrow. Likely to miss some time.

“Joe is injured and probably not only a little bit. We have to see, we don’t know in the moment. We sent him home.”

Gomez will be a massive miss for Liverpool and his injury couldn’t have come at a worse time for himself or the team.

Gomez has been tipped to break into Liverpool’s defence for years and the ex-Charlton boy has finally managed to do that, but a lot of his time at Liverpool has been hindered with injury problems.

Liverpool are also about to get underway in a congested pile up of fixtures.

Klopp was very disappointed with the fact that Burnley weren’t warned from committing such heavy tackles on his players:

Klopp unhappy with sliding challenge which caused Gomez injury. There had already been one before his ankle was done. Klopp: ‘After the first challenge sliding tackle from 7 or 8 yards I said to the ref: ‘Please tell them you can’t do that'. Someone has to say ‘Stop doing that’

The Reds will play 3 games in 8 days starting with their Premier League tie against Bournemouth on Saturday, followed by a midweek ‘all or nothing’ Champions League clash with Napoli.

Their congested schedule is rounded off with a eagerly anticipated clash against bitter rivals Manchester United next Sunday.

Klopp clashed with Burnley boss Sean Dyche at the full-time whistle and it’s no doubt that the German was disappointed with Burnley’s rough and tough style of play:

some words between Klopp & Dyche ??? pic.twitter.com/KYg8i6Laad