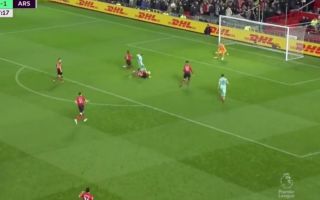 Arsenal regained the lead against Man United this evening through Alexandre Lacazette, as the Frenchman made Marcos Rojo pay for a poor mistake.

The goal came in the 67th minute, as Rojo got caught in possession, something that lead to Henrikh Mkhitaryan feeding Lacazette, who rolled the ball home to give the Gunners a 2-1 lead.

The home side then equalised just seconds later through Jesse Lingard, a goal that we’re sure Rojo was delighted to see happen given his mistake just a minute or two earlier!

Here’s a clip of Lacazette’s goal. What was Rojo thinking?

Keep, sell, or loan? Nine Arsenal players Arteta needs to decide on in this transfer window