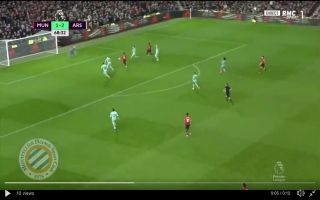 Manchester United attacker Jesse Lingard equalised for the Red Devils straight from kick-0ff against Arsenal this evening after a horrific defensive mix up.

United managed to score directly from kick-off after they conceded a cheap goal against the Gunners. Marcos Rojo launched the ball into the path of target man Romelu Lukaku and the Arsenal defence crumbled when up against the big Belgian.

The ball ran back to Arsenal’s goal and Lingard beat Sead Kolasinac and goalkeeper Bernd Leno to the punch to get United back into the game with a truly opportunistic finish.

Check out Lingard’s equaliser below: