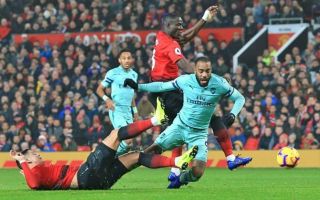 Arsenal striker Alexandre Lacazette was not a happy man after being robbed of a goal in the 2-2 draw with Manchester United on Wednesday night.

The France international looked to have bundled home a scrappy goal to make it 2-1 to Arsenal in the second half, and injured himself slightly in the process.

MORE: Arsenal star expected to miss the rest of the season after injury vs Manchester United

For all his trouble, however, Lacazette does not seem to be the Gunners’ official scorer, with the final touch apparently going in off Marcos Rojo, with the Premier League tweeting that it will go down as a Rojo own goal.

Lacazette, perhaps in a bad mood anyway as his goal put Arsenal in front for about a minute before another United equaliser, hit back at the decision with a tweet showing his disbelief.

See the tweet below as the former Lyon man showed his hunger for goals as he competes with Pierre-Emerick Aubameyang for a place up front in this competitive Arsenal squad.