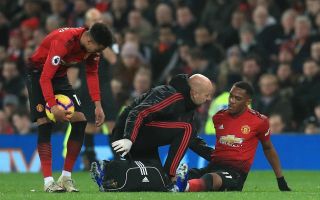 Manchester United manager Jose Mourinho has provided an important injury update on Anthony Martial after he went off in the 2-2 draw against Arsenal on Wednesday night.

The France international scored for United to make it 1-1 in the first half, maintaining his fine form for the Red Devils this season in the absence of some big names like the injured Alexis Sanchez and the out-of-form Romelu Lukaku, who was benched by Mourinho.

However, Martial then had to go off later in the game, with MUFC fans likely to have been worried by what they saw after so many other players on the treatment table at the moment.

Mourinho, however, has now provided a positive injury update on the 23-year-old, saying the player himself does not think it’s a serious injury.

‘He doesn’t think it is an injury,’ the Portuguese said, as quoted by the Metro.

‘He thinks it’s a pre-injury, he was feeling tight.’

United will hope to have Martial back for the Fulham game this weekend as they’ll need his pace and goal threat if they are to end their poor recent run of just one win in their last five games in all competitions, and just three in their last ten in the Premier League.