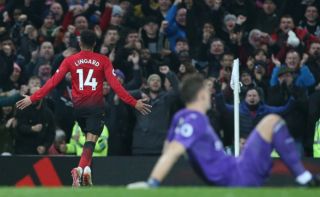 The Red Devils tweeted out the line ‘not a cellphone in sight, just people living in the moment’ – a running Twitter joke going around at the moment.

MORE: Not Pogba: These Manchester United fans tell Jose Mourinho who the real ‘virus’ is after 2-2 Arsenal draw

However, a closer look at the photo of Lingard celebrating the goal shows people in the crowd who are indeed capturing the moment on their phones, as is all too common these days, whether at football, a gig, or even breakfast.

Not a dig at United fans in particular, but let’s face it, almost everyone wants some fan footage to call their own when they go to games, so this tweet was never going to look anything other than silly.

not a cellphone in sight, just people living in the moment pic.twitter.com/RZmABHUMcw