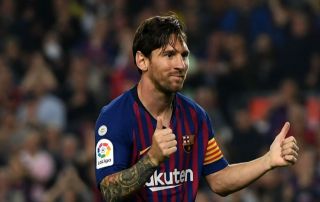 Lionel Messi has firmly established himself as a Barcelona icon, and he will now reportedly help develop one of the next top prospects at the club.

The 31-year-old has scored 567 goals in 653 appearances for the Catalan giants, has won nine La Liga titles, four Champions League trophies and countless others and individual accolades in a glittering career.

A key figure in his early development to help him realise his full potential and to take the spotlight away from him while he was improving was Ronaldinho, who became a Barca legend in his own right too.

Now it’s claimed by Mundo Deportivo that Messi is set to play a ‘tutor role’ for starlet Carles Alena as Ronaldinho did for him, which is arguably a huge indication that Barcelona believe that the 20-year-old is going to be a fundamental figure for them in the years to come.

Injuries and lack of opportunities have limited the youngster thus far, but having now been given his official first-team number, as seen in the video below, it appears as though he’s now ready to make his mark and prove his worth.

In turn, having a player like Messi to share his experience and knowledge of the game is undoubtedly going to benefit him and help him develop, regardless of whether or not he plays in a different position and role.

It’s stressed in the report that ultimately Messi will now try to help him take his game to the next level by perhaps working a little closer with him in training, but of course much will depend on Alena’s work ethic and desire to be the best. Having the Argentine legend behind him is certainly going to help though…

??2?1? @Carlesale10 shows off his new number!
Looking forward to seeing it on your back, Carles!#ForçaBarça pic.twitter.com/Pf0PYNUqq0