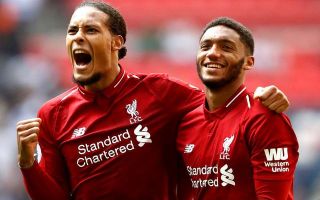 Liverpool defender Joe Gomez has been ruled out for up to six weeks with a fractured leg, and Virgil van Dijk is seemingly going to miss him.

As noted by BBC Sport, the 21-year-old sustained the setback during the win over Burnley in midweek and will now face a lengthy spell on the sidelines.

That partnership in the heart of the Liverpool backline has been fundamental to their promising start to the campaign, as although they haven’t played every game alongside each other, they’ve had major roles in helping the Reds keep the best defensive record in the Premier League at this stage.

They’ve conceded just six goals in 15 games which has helped them remain unbeaten, and it certainly appeared to be offering the rest of the team the platform for the Merseyside giants to launch a genuine title bid this season.

Time will tell how they fare without Gomez as that partnership will now be broken up, although boss Jurgen Klopp does have the likes of Dejan Lovren and Joel Matip available to fill in.

Nevertheless, after Van Dijk sent his teammate a reply on Twitter after Gomez posted a video thanking everyone for the support that they’ve sent him, as seen below, countless Liverpool fans couldn’t hide their delight and emotions over the obvious bond the two have built up.

Van Dijk has been a leader at the back, but he’ll have to adapt and remain as defensively sound with a new teammate beside him in the Liverpool defence through the festive period as Gomez now goes through his recovery.

I live for this CB partnership pic.twitter.com/BCYXaxLgU1

Best CB pairing in the world

I love you both so much

I’m going to miss this partnership over the next six weeks ?

Photo: Liverpool star Virgil van Dijk spotted with the national team as he entertains the subs at half-time vs Scotland Jun 2 2021, 20:53
Liverpool FC

Liverpool in talks with AC Milan star as Jurgen Klopp prepares to strengthen his side ahead of the 2021/22 campaign May 28 2021, 10:44
Liverpool FC