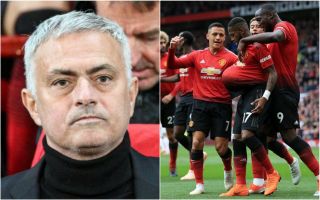 Man Utd boss Jose Mourinho has explained why summer signing Fred has struggled for playing time, and it hasn’t gone down very well with some supporters.

As noted by Sky Sports, United splashed out around £52m on the Brazilian international this past summer, as he ultimately proved to be their only real marquee addition.

Since then, the 25-year-old has managed to make just 10 appearances in all competitions, being used sporadically between spells on the bench.

In turn, it will undoubtedly have been a frustrating spell for Fred himself, but also for the fans given that they would have been itching to see him in action on a regular basis this season to see him develop and improve.

It hasn’t worked out that way and now Mourinho has essentially conceded that Man Utd’s defensive vulnerabilities mean that he doesn’t feel comfortable using Fred until they shore things up at the back.

“I think [with] Fred, when the team is defensively stronger and doesn’t need in midfield people that is more worried in giving some balance to the team than being involved in creation and attacking dynamics, the day we are stronger defensively, I think the horizons for Fred change completely,” he is quoted as saying by The Telegraph.

On one hand, he has a point. Man Utd have conceded 25 goals in 15 league games so far this season, giving them the worst defensive record of the top 15 sides, and so he must find the solution to tighten things up.

However, it begs the question then why Fred was signed before the defensive flaws were addressed, and ultimately how a player of his quality is considered likely to be left exposed and vulnerable rather than improving the team.

As seen in the tweets below, many United fans were not impressed with Mourinho’s assessment…

Wtf is he on about? Hes the fourth most expensive player in Uniteds history and now he cant use him?? We cant trust Mou with another cent

Literally making it up as he’s goes along

I suppose it’s now a case of seeing out the rest of the season as best we can and then this nightmare can end.

so basically it’s 2 fingers to the board for not getting him a CB in the summer. he’s cutting his nose off to spite them.

That day you will not be the Manchester United manager. Clown. #MourinhoOut

If Jose Mourinho has admitted that he won’t play Fred until Manchester United improve defensively, then why was Fred signed for £50m+ in the summer when Mourinho knew exactly what type of midfielder he was? Especially when Man United didn’t sign a new centre-back #mufc pic.twitter.com/3tnK9eVuBX

So #Fred doesn’t play because #Mourinho didnt get a CB in the summer?! He knew exactly what he was signing in the summer…We already got 2 quality CB that have their confidence shattered by this miserable shit every week!

Such a joke, the best form of defence is attack!! Pains me to say that but look how city play! The opposition can’t score if we keep the ball!

then why buy him

This pretty much must confirm Fred wasnt a Jose signing? #confused