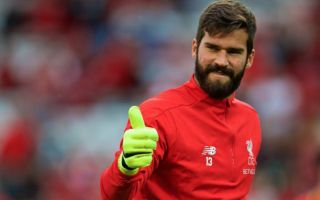 Liverpool absolutely thrashed Bournemouth 4-0 at the Vitality Stadium on Saturday afternoon, a result that took them to the top of the Premier League.

A hat-trick from Mohamed Salah and an own goal from Steve Cook ended up being the difference between the two sides, as Liverpool continued their unbeaten start to the Premier League season.

However, that wasn’t the only thing that was impressive from the Reds’ performance, as by not losing the match, it meant that goalkeeper Alisson broke the record for the most games without losing at the start of a player’s Reds career.

The record was previously held by Javier Mascherano, who went his first 15 games without losing when he joined the Merseyside club from West Ham back in 2006.

But, following their win earlier, Alisson broke the Argentine’s record, as he’s now gone 16 games in a row without defeat at the start of his stint with Liverpool.

16 – Alisson has become the first @LFC player to remain unbeaten in his opening 16 @premierleague appearances for the club, overtaking Javier Mascherano's previous record of 15. Solid. pic.twitter.com/ooWW9qTcwP

Alisson can take major credit for this feat as well, seeing as the Brazilian has been a key player for Jurgen Klopp’s side so far this season.

Opinion: Liverpool made their last genuinely good signing on this day 3 years ago – their record since then should have Reds fans worried

Liverpool have scored significantly more Premier League stoppage time winners than anyone else May 17 2021, 6:48
Liverpool FC