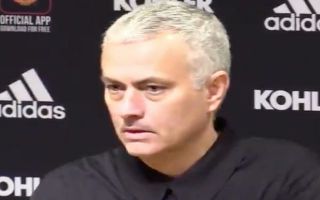 Man Utd boss Jose Mourinho was seemingly in a good mood after his side’s 4-1 win over Fulham on Saturday, as he even made jokes at his press conference.

The Red Devils put in a much-improved performance against Claudio Ranieri’s side, scoring three goals in the first half as they took their chances and secured a convincing win.

SEE MORE: ‘Outstanding, MOTM for me’ – These Man Utd fans flood star’s timeline with praise after display vs Fulham

Given their recent form, it was much needed in their bid to close the gap on their rivals in the race for a top-four finish this season, and so it was perhaps no surprise that the Portuguese tactician was in a better mood this weekend.

As seen in the video below, after spotting that there was no water on the top table as he took his seat for the press conference, he jokingly suggested that Man Utd were cost-cutting in order to save for the January transfer window.

Jose Mourinho wasn’t impressed with the lack of water at his post-match press conference ? pic.twitter.com/1IL51SFzRR

However, it wasn’t all jovial for the United boss, as he also had a word on Paul Pogba, with the Frenchman left on the bench again this weekend having previously been left out against Arsenal and Young Boys in recent weeks.

As he revealed that the World Cup winner would start against Valencia in the Champions League next week, he challenged him to show his worth.

“He has to play with the same mentality as the team is playing,” he is quoted as saying by The Independent.