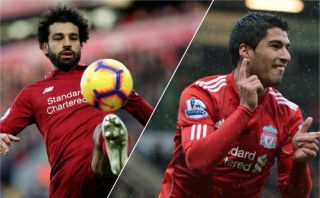 Mohamed Salah scored a hat-trick for Liverpool this afternoon, as the Egyptian played a huge part in the Reds’ 4-0 win over Bournemouth at the Vitality Stadium.

The former Chelsea man scored two superb solo efforts, combined with an alert finish following an effort from Roberto Firmino, to guide Jurgen Klopp’s side to a thrashing against the Cherries.

Salah’s treble was also the first time since 2014 that a Liverpool player has bagged a hat-trick in the Premier League away from home, with Luis Suarez managing the last one against Cardiff.

3 – Mohamed Salah is the first Liverpool player to score an away hat-trick in the Premier League since Luis Suarez v Cardiff in March 2014. Clinical. #BOULIV

This stat may come as a shock to some fans, especially when you consider the calibre of players Liverpool have had at their club since then.

It’s surprising to think that any of Philippe Coutinho, Roberto Firmino or Sadio Mane have all failed to bag an away hat-trick for the Reds in the past few years, particularly when you consider that these are some of the best players the Premier League has had to offer in recent times.

However, Liverpool fans surely won’t care that much, especially when they realise they could end this weekend’s round of fixtures top of the league should Man City lose to Chelsea on Saturday evening.