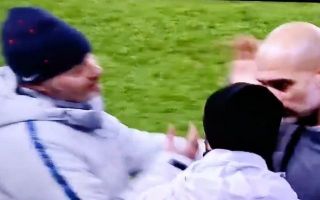 Man City fell to their first Premier League defeat of the season to Chelsea on Saturday evening, and Pep Guardiola didn’t appear too happy with a member of the Blues coaching staff.

The Spanish tactician would undoubtedly have been frustrated after the loss, especially after seeing his side dominate in the first half but ultimately fail to make the most of their possession due to a lack of cutting edge in front of goal.

Goals from N’Golo Kante and David Luiz sealed the victory for the hosts, leaving Liverpool sitting top of the Premier League table after 16 games, a point above Man City.

As seen in the video below though, Guardiola appeared to be upset with one member of the Chelsea coaching staff in particular as he left the pitch after sharing a warm embrace with Blues boss Maurizio Sarri on the touchline.

This isn’t the first time that a Chelsea coach has had a run in with a rival boss, as noted by The Independent, with Jose Mourinho previously involved in a tense altercation at Stamford Bridge earlier this season.

While this was seemingly less heated, Guardiola clearly wasn’t impressed with him but it remains unclear as to what their issue was over.

Salty much?? imagine if it was Mourinho or Klopp the media would go mad. Be a professional Pep pic.twitter.com/xn28b7GjGS #CHEMCI

Man City and Wolves set to battle it out for highly-rated Championship defender available for just £10m Jul 12 2021, 10:45
Manchester City