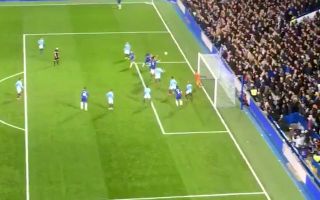 Chelsea defender David Luiz scored his first goal of the season as he doubled his side’s lead against Manchester City at Stamford Bridge on Saturday.

N’Golo Kante had given the hosts the lead in the first half against the run of play, with City dominating possession but failing to take their chances.

That theme continued after the interval as City toiled in their bid to find a breakthrough and get back into the game, with Luiz eventually putting Chelsea in a dominant position to secure all three points.

As seen in the video below, the Brazilian international rose highest from a corner and expertly directed his effort towards the back post as he beat Ederson to nestle into the back of the net.

It was a crucial goal for Chelsea, while Liverpool fans will also have enjoyed it as if City fail to win at Stamford Bridge, the Reds will sit alone at the top of the Premier League table after this weekend.

DAVID LUIZ!!!! What a man!!! What a celebration!! I told you we got this!!! #CFC pic.twitter.com/qVTlGHbslt

He’s been excellent all game and he might just have won it for us!!! @DavidLuiz_4 ??? #CFC #KTBFFH #CHEMCI pic.twitter.com/jT6LN80WAn

David Luiz rises highest and doubles @ChelseaFC‘s lead! ?@ManCity have less than 10 minutes to turn this around…

Free agent XI: Lionel Messi, Sergio Ramos, plus Man Utd and Arsenal stars who are out of contract today