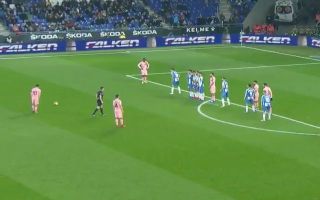 Not content with scoring one world-class free-kick against Espanyol, Lionel Messi produced two moments of brilliance for Barcelona in their clash on Saturday.

The 31-year-old produced a stunning strike in the first half to break the deadlock, with Ousmane Dembele and Luis Suarez adding two more goals to put the Catalan giants in a dominant position.

Espanyol had their moments too, but ultimately it was Messi who stepped up and made it 4-0 just after the hour mark as he produced yet another sensational effort from a dead-ball situation, as seen in the video below.

This time his effort was from the opposite side of the goal, but it made no difference to the Argentine icon as he stepped up and curled in a wonderful effort that gave Diego Lopez no chance.

To produce one moment of brilliance in such an important game is one thing, but to deliver twice and in such incredible fashion is what separates Messi from others.

In this type of form, it’s difficult to see anyone being able to stop him as Barcelona look to open up a three-point lead at the top of La Liga with a win as they try to take advantage of Sevilla being held by Valencia.

Lionel Messi has scored another free-kick, he is not human. ? pic.twitter.com/JZxyI6CCXJ