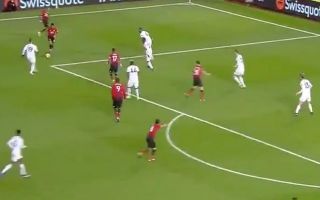 Marcus Rashford got himself on the scoresheet as Man Utd secured a 4-1 win over Fulham at Old Trafford on Saturday.

Goals from Ashley Young, Juan Mata and Romelu Lukaku had given the Red Devils a healthy first-half lead, but they saw Aboubakar Kamara reduce Fulham’s deficit from the penalty spot in the 67th minute.

However, that didn’t spark an unlikely comeback from the visitors, and Rashford put the game to bed in the 82nd minute with his strike from distance, as seen in the video below.

Question marks could perhaps be raised on the goalkeeper being beaten at his near post, but it was a fierce effort from the England international which proved to be too much for Sergio Rico to handle.

It was a vital win for Jose Mourinho and his men as they look to cut the gap on their rivals in the race to finish in the top four in the Premier League, while to produce such an impressive attacking display in the first half in particular will have boosted their confidence too.